My son was born in 2002, right around the time when autism became better recognized. We had many friends whose children received a diagnosis somewhere along the spectrum, and through my reading about this condition and its symptoms, I was able to recognize the signs of sensory processing disorder in my son and acquire the appropriate therapy to help him manage the ways his body responded to certain stimuli. I’ve maintained an interest in reading about autism, its therapies, and means to manage the condition over the years, so when Kate Curry asked me to read and review To Kiss the Blarney Stone, her memoir of her son, his autism diagnosis, and how she worked to ensure he had every chance of success in life, I agreed.

Kate Curry’s story begins with her son Brenden’s adoption from Korea. Even early on, her instincts told her something was different about Brenden in the way he never responded to her voice or his name, and how he missed milestone after milestone, but since his doctors never seemed concerned, she focused on her joy in finally becoming a mother. It was only when Brenden’s little sister Emily began meeting all her milestones that Kate began to realize that Brenden needed further evaluation.

Originally misdiagnosed with ADHD, Brenden didn’t receive his autism diagnosis until age six, despite his speech, among other developmental skills, being profoundly delayed; even this diagnosis came solely because Ms. Curry pushed so hard for the evaluation in the first place. What followed ended up being a marathon-length obstacle course in the pursuit of obtaining appropriate services, therapies, accommodations, and modifications to ensure that Brenden could learn in ways that best suited his learning style. Far from being eager to help a struggling student succeed, the schools often fought against providing Brenden with even the simplest accommodations, necessitating an out-of-state move for the family to a school district better suited to students with autism. The struggle didn’t end there, though; Kate and her son had to fight every step of the way in order to make Brenden’s academic career a success.

This is the story of a mother’s continuous uphill battle to help her child carve his own unique path in the world, told in the style of a friend chatting over coffee. While the writing lacks finesse and polish, and there are sections full of legal documents and technical jargon that may not interest the casual reader, Ms. Curry’s strength and determination, combined with Brenden’s hard work, are admirable, and this wouldn’t be a bad read for parents starting out on their journey with autism, specifically to inform themselves of the fight far too many parents must go through in order to access appropriate services. Throughout the story, Mr. Curry gives advice and names resources that Brenden used that might prove useful to other parents (if, after time, these resources become obsolete, a Google search may point the searcher down the path of updated resources); occasionally, Brenden’s voice appears, adding his memories and feelings about the part of his life that his mother had been describing, and his take on things provides a colorful addition.

It’s heartening to know that Brenden, who lacked the expressive speech necessary to describe his day at school to his mother until third grade, has since graduated from college. He didn’t have an easy road, and Ms. Curry fought so hard to make his success possible. While I did find that the book could have benefited from a more thorough editing in order to better refine the writing, To Kiss the Blarney Stone gives an interesting look at how hard a parent will battle to provide their child with what they need to flourish, and I’m so proud of Brenden and all that he’s accomplished. Well done, young man. 🙂

Thanks to Kate Curry for providing me with a copy of her book to read and review. 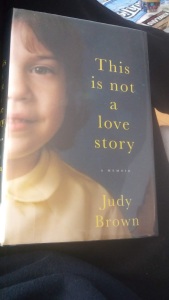 This Is Not a Love Story by Judy Brown is a painful memoir about the author’s childhood, growing up with a brother that no one understood.

Brown, who also penned the phenomenal YA novel Hush under the pen name Eishes Chayil (which was seriously so good that I sat up until 2 or 3 am, reading it on the bathroom floor with the door closed so the light wouldn’t bother my sleeping husband, because it was winter and the downstairs was far too cold to be comfortable in, and so I made do and it was entirely worth it), grew up in a Hasidic Jewish family in the Flatbush neighborhood of Brooklyn. She’s the third of six children, and she’s aware from an early age that her younger brother Nachum isn’t like everyone else. He doesn’t talk, he seems to stare through everything and everyone without seeing any of it, he bangs his head and rocks, he can’t tolerate touch or loud noises, he has public meltdowns.

Most readers today probably recognize those characteristics as falling on the more severe end of the autism spectrum, but back in the early 80’s, no one seemed to know what was wrong with Nachum. ‘Crazy’ was the word most frequently used to describe him and his behavior, and her insular community assigned many reasons as to why Nachum acted the way he did, including the rumor that Brown’s parents, disregarding Hasidic tradition, fell in love before they were married. The entire family is deeply stressed by Nachum’s mysterious behavior, each family member showing it in different ways. Their mother never stops searching for answers, dragging her son from doctor to doctor. Their father alternately shuts and explodes with anger. Brown makes deals with God to help her brother, prays for his death, and feels nothing but relief the two times Nachum is shipped off to live with relatives in Israel. Her behavior seems harsh until you remember that no one understood what was wrong, and she was only eight years old and extremely frightened (to the point where she worried that Nachum was contagious, and that her future marriage prospects- something incredibly important among the Hasidic community- would be compromised, because no one would want to marry someone with such a brother, which wasn’t an unfounded fear if you know anything about Hasidic matchmaking).

In 1993, when Nachum is sent to Israel for the second time, a specialist finally diagnoses him with autism, something Brown’s mother had never heard before, and his life starts to change. When Brown reluctantly visits him four years later, she finds a brother who can talk- differently than her, haltingly, but he’s a brother she finally starts to understand, because he’s able to participate in the world around him.

This is a tough, sad read, and it’s important to remember that when the author was young, especially in her insular community, there wasn’t quite the understanding we have of autism now. I have to admit, I was surprised by the medical community’s inability to diagnose Nachum- if I read this correctly, Brown is about my age, and thanks to The Babysitters Club book Kristy and the Secret of Susan, I was aware of autism back in 1990/91 when I was just ten or eleven years old. Nachum wasn’t diagnosed until 1993. Were doctors more conservative with that particular diagnosis back then? I’m deeply curious as to how it took him so long to receive the proper diagnosis (and it wasn’t for a lack of trying on Brown’s mother’s part, that’s for sure). This book also made me realize how damaging the societal attitude about people with disabilities was in the past- not just for those with disabilities, but for their families as well. Brown and her siblings suffered deeply (as did the parents, my goodness), and it was only as an adult that Brown was able to connect with her brother, reconcile her childhood attitude towards him, and forgive herself. We still have so far to go in terms of how we treat people with disabilities, but thank goodness we’ve already come so far.

This isn’t an easy read, but it’s a deeply fascinating one.